MCI: HOW THE YEAR HAS BEEN SO FAR

We have almost come to the end of 2018 and here’s how we have progressed thus far.

Promoting women in the maritime sector
In September 2018, Maritime Training Advisor Ore Toua was in the Cook Islands and met with CIWiMA (Cook Islands Women in Maritime Association) to discuss on the Regional Strategy for Women in Maritime. The Secretariat of the Pacific Community started a Domestic Ship Safety Training with local stakeholders and in collaboration with the Ministry of Transport.

MCI CEO, Glenn Armstrong said: “The progress for the ship registry so far has been encouraging, with more significant growth this year despite prevailing market challenges. Here’s to a great last quarter!” 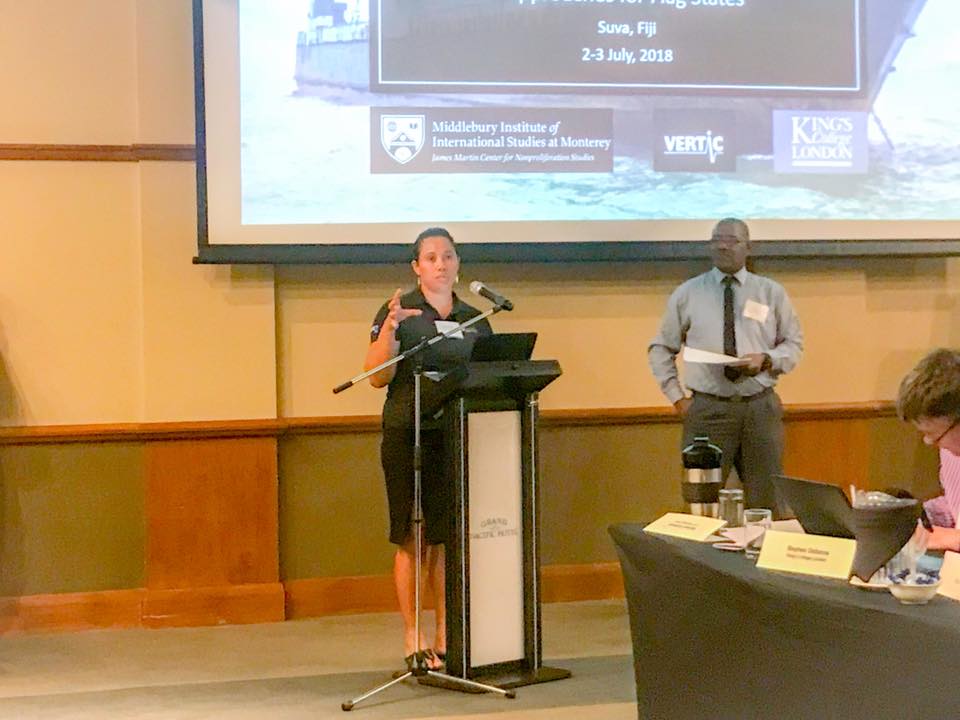 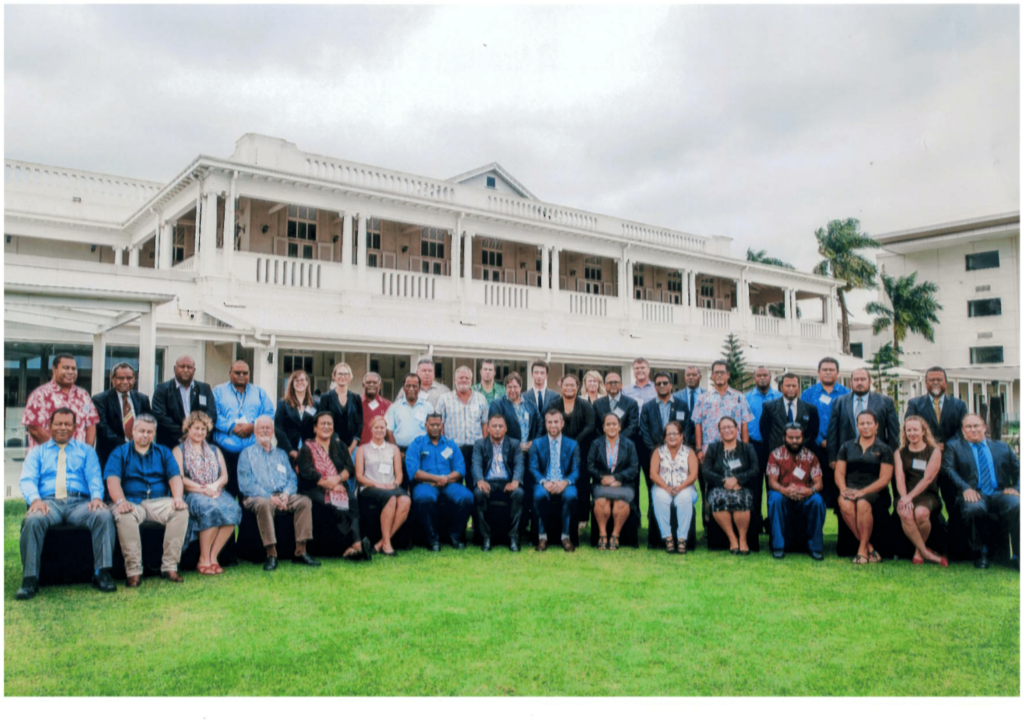 Goals of the workshop:
– Share methods used by the DPRK to evade UNSCRs
– Identify gaps in capacity to prevent, detect, and interdict elicit vessels and goods
– Increase understanding of regulatory and operational roles
– Identify interagency and opportunities for sharing of resources and information within the Pacific Island region to effectively enforce the UNSCRs
– Share experiences between the Pacific Island Countries regarding their registry processes and procedures and challenges encountered relating to interpretation and implementation of UNSCRs

MCI PROMOTES CAREERS IN MARITIME ON DAY OF THE SEAFARER 2018 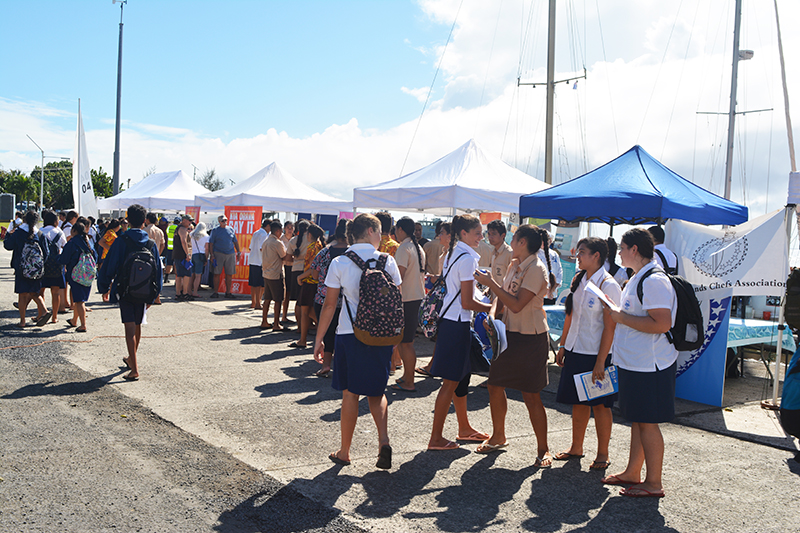 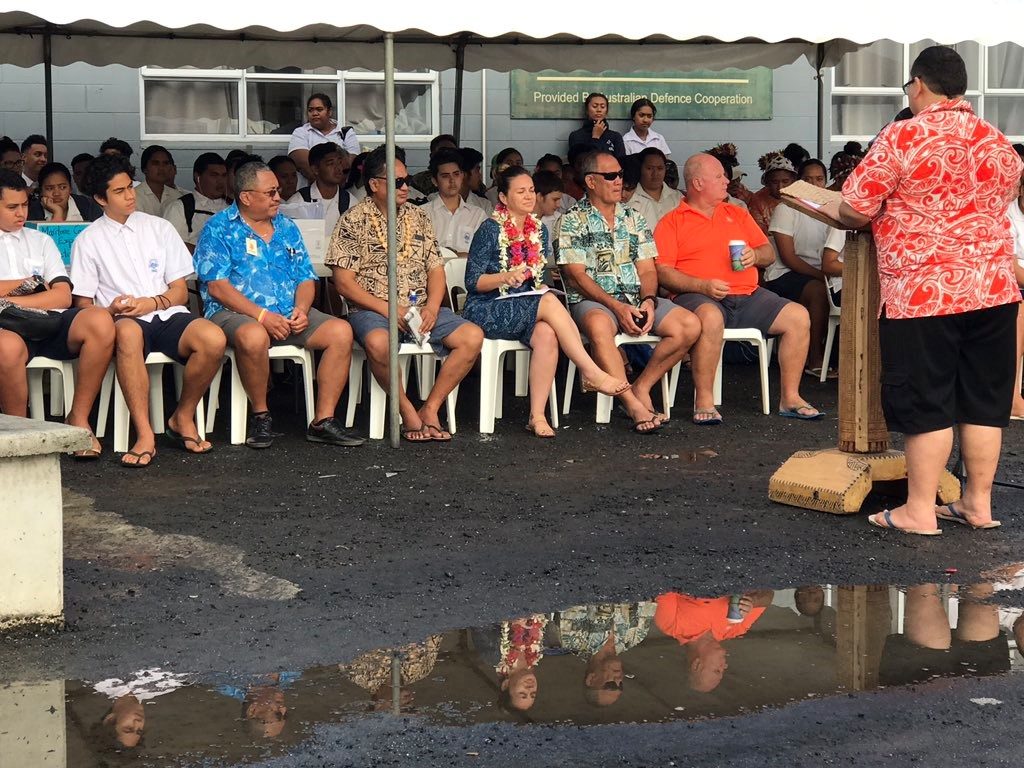 The event, held at Avatiu Wharf, allowed attendees to explore a spectrum of career opportunities that are available within the maritime industry, both locally and internationally.

Attended by over 900 students from Rarotonga and 23 flown in from nearby island Aitatuki, the students gained insights on the qualifications and skills requirements, as well as the career progression for each respective maritime role.

Exhibitors at the expo included: 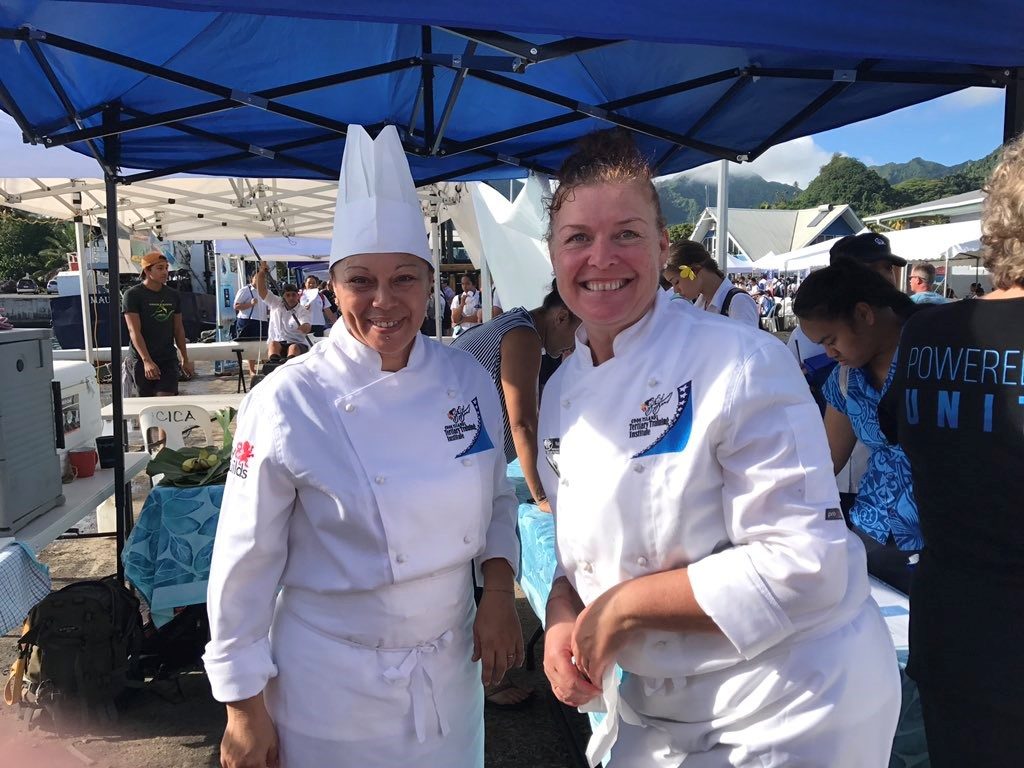 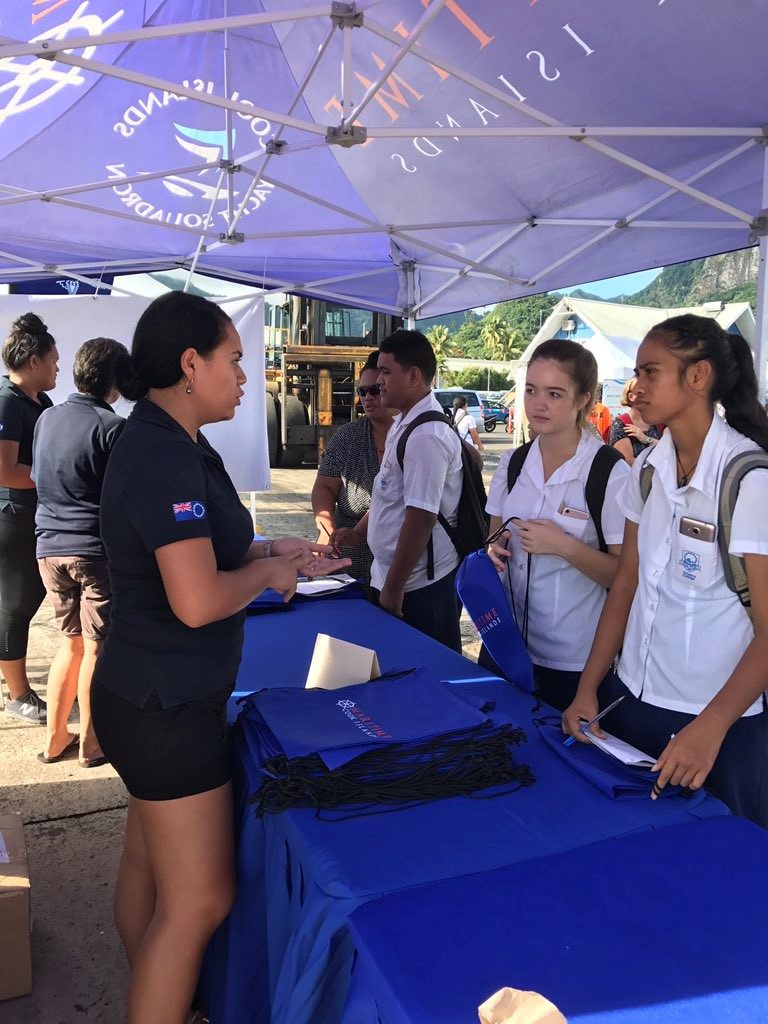 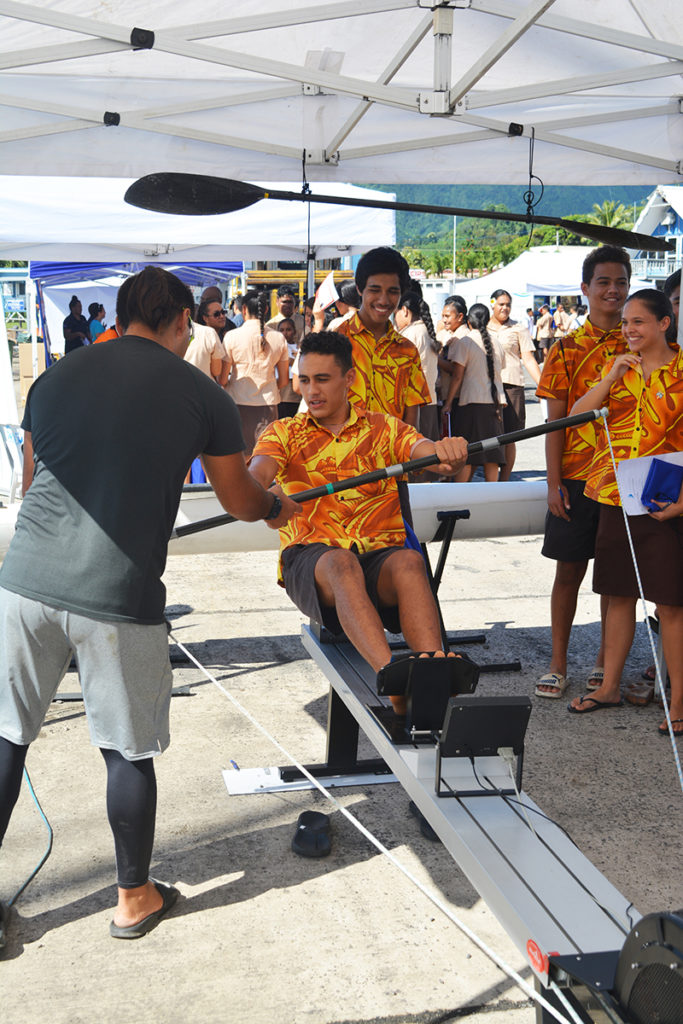 MCI CEO Glenn Armstrong said: “This careers expo is an extension of our previous efforts in engaging with the youth – to further harness their interest and knowledge of the shipping industry.”

He added: “With the involvement of other government departments, we were able to deliver a more holistic programme for the students, as well as for the general public. More than just promoting careers in maritime, we chose the Day of the Seafarer to at the same time acknowledge and recognise the contributions of seafarers worldwide.” 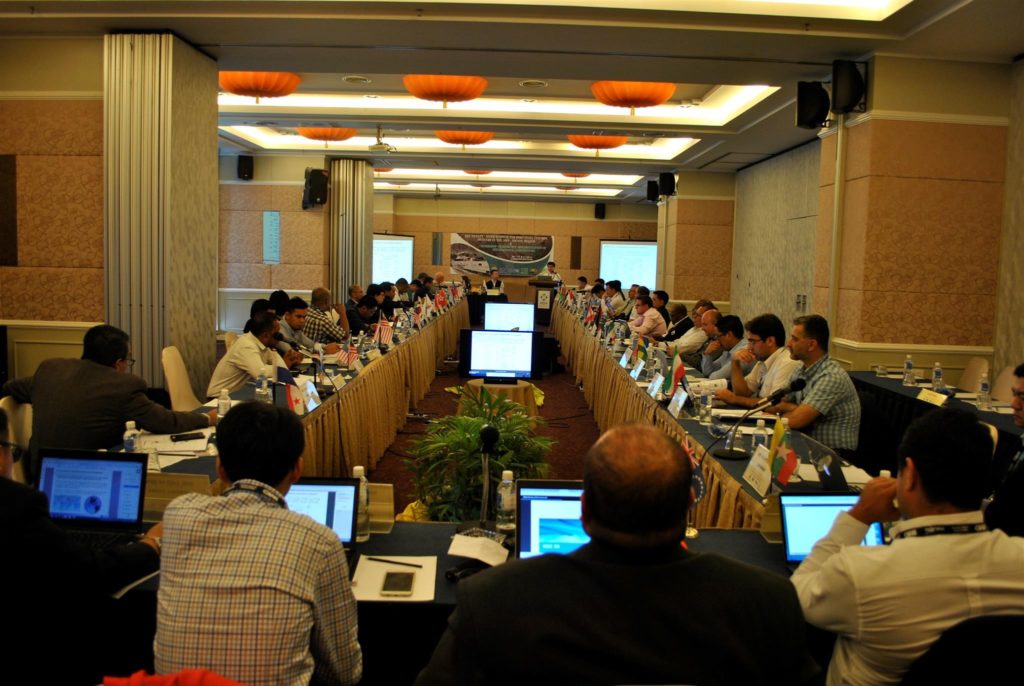 MCI’s Technical Manager Brendan Smith, in July, attended the 26th Seminar for Port State Control Officer in the Asia-Pacific Region and Workshop on Effective Implementation of International Conventions which was held in Langkawi, Malaysia.

Jointly organised by Malaysia Marine Department and Tokyo MoU, with support from IMO and The Nippon Foundation, the five-day seminar/workshop which saw the participation of over 50 industry experts and professionals, discussed on a broad array of topics including:

More photos from the seminar below: 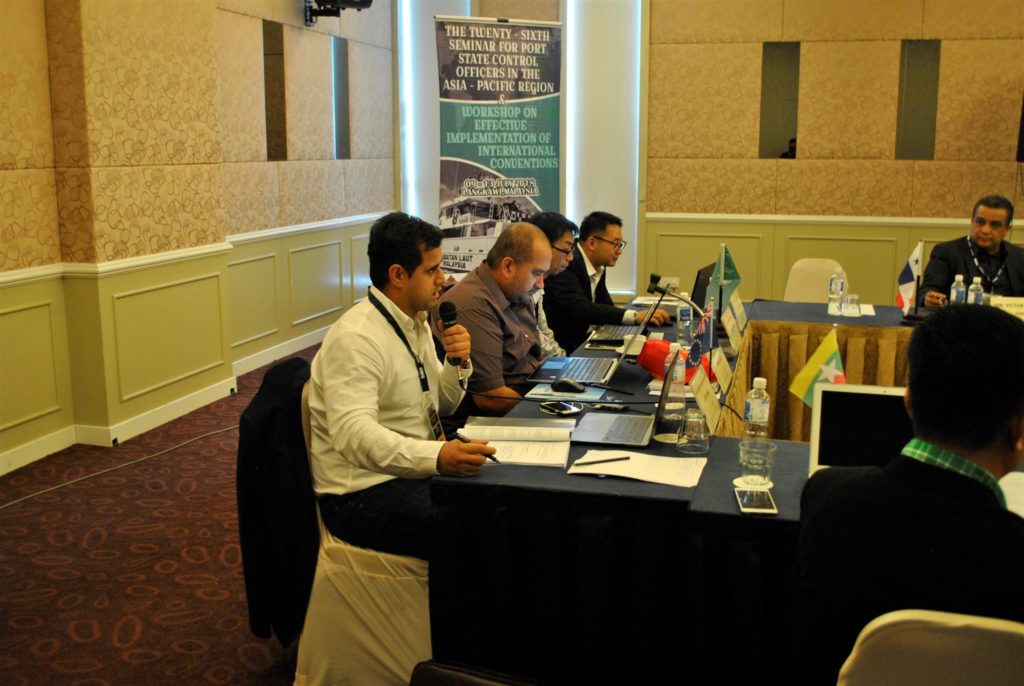 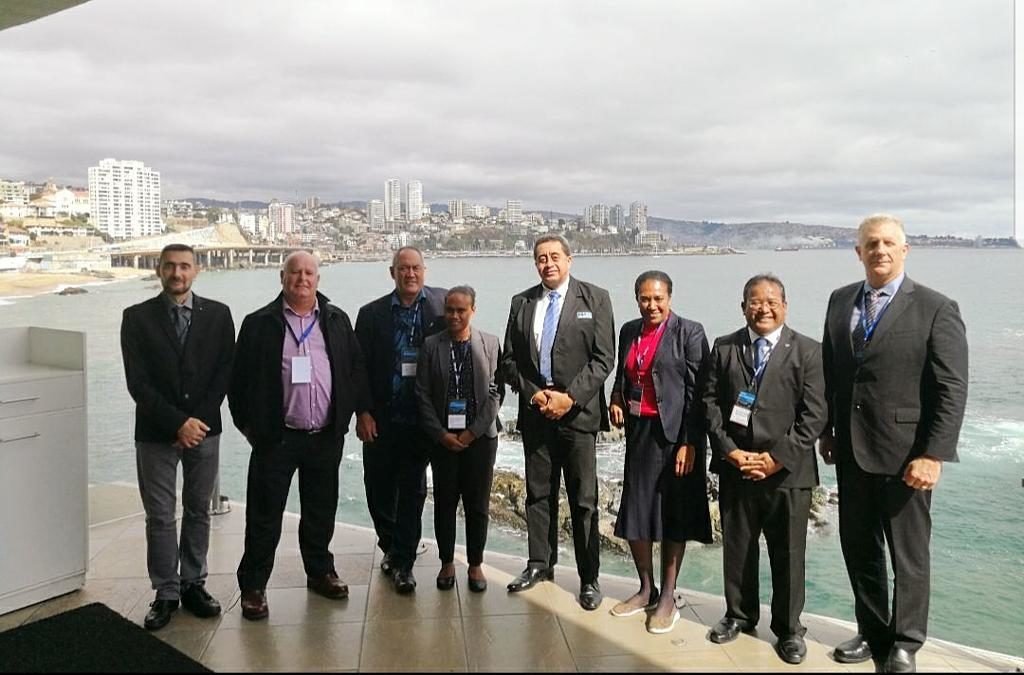 The 4-day forum which took place at Sheraton Miramar Hotel in Vina del Mar, Chile, brought together senior maritime officials from over 24 countries and international organizations to discuss and identify areas which needs to be addressed for a safer, secure shipping and a cleaner maritime environment.

Topics that were discussed at this year’s forum included:

With the advent of technology, the officials talked about the next-generation maritime safety system and building of e-Navigation, a strategy developed by the IMO to improve storage of marine information in an organized manner.

c. Handling maritime accidents
In a bid to rally international cooperation in the investigation of marine accidents, the representative of the various member countries shared on maritime accidents / search and rescue at sea, they experienced or know of.

The next session of APHoMSA will take place in The Republic of Korea. 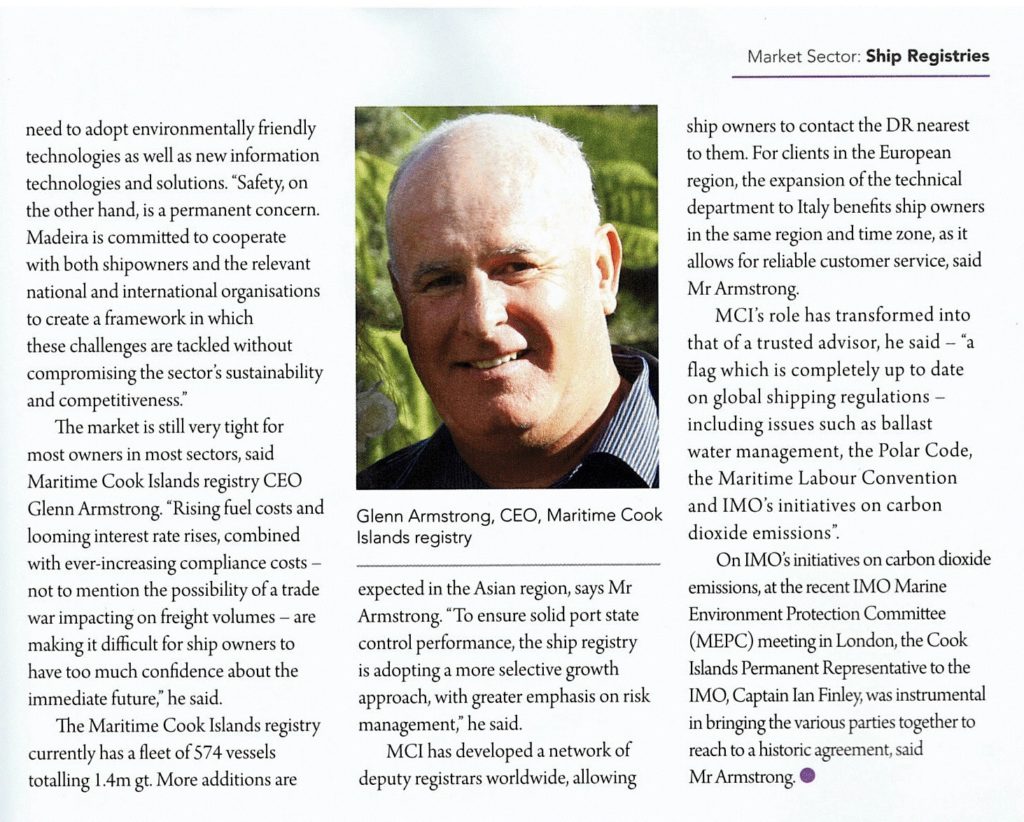 “Rising fuel costs and looming interest rate rises, combined with ever-increasing compliance costs – not to mention the possibility of a trade war impacting on freight volumes – are making it difficult for ship owners to have too much confidence about the immediate future,” he said.

Glenn also highlighted on the changing role of ship registries, to that of a trusted advisor. 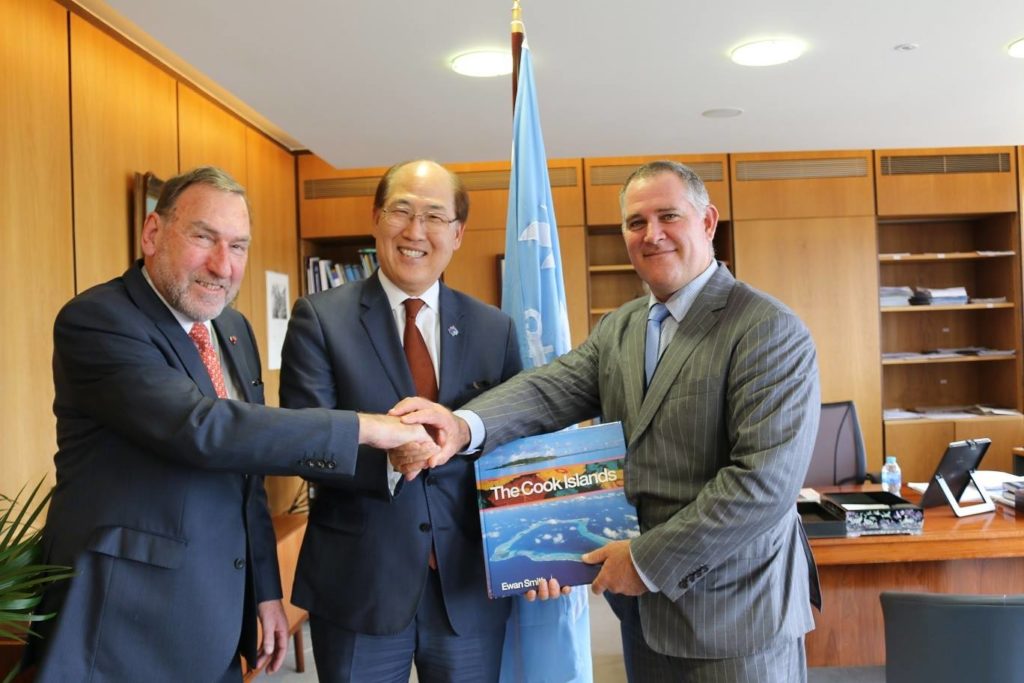 It has been an incredible year of meetings at International Maritime Organisation (IMO), all in the spirit of promoting a safe, clean and secure maritime environment. Below are the IMO meetings our MCI colleagues have attended this year: 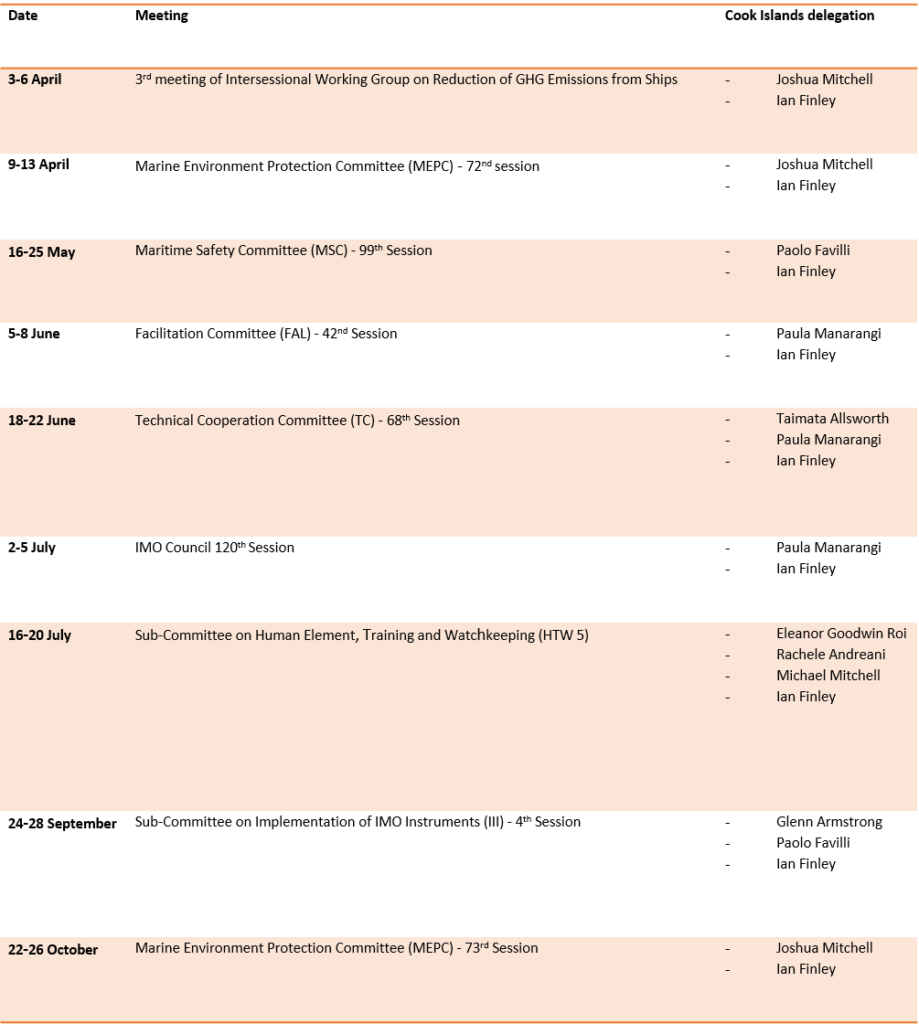 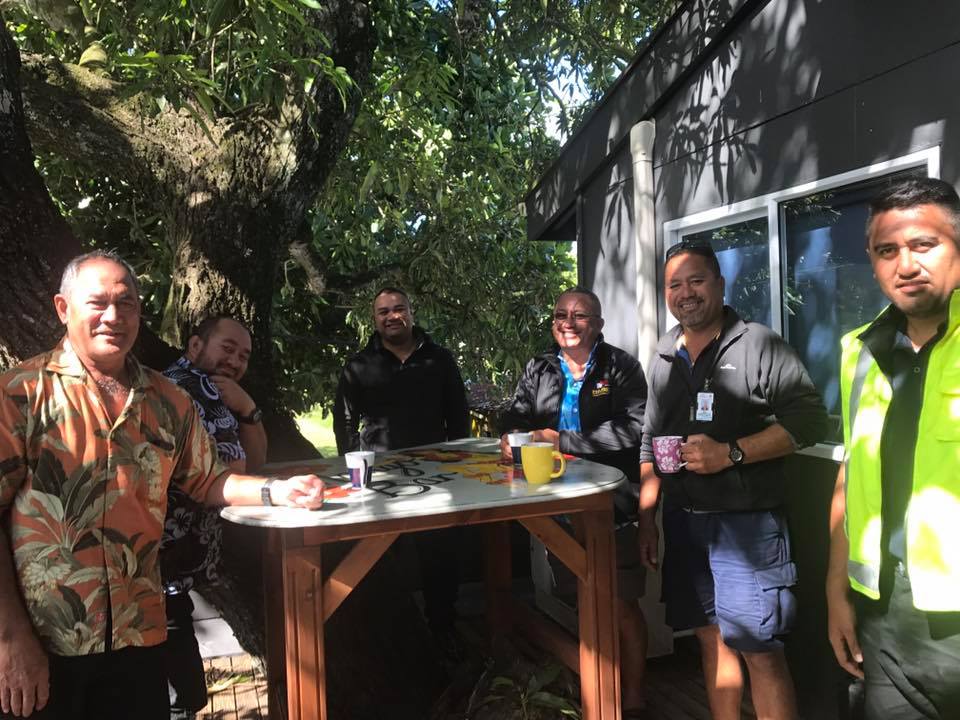 The full-day workshop aims to seek improvements in domestic shipping – establishing the respective roles and responsibilities of each government agency, pertaining to maritime safety and the protection of the maritime environment with respect to domestic shipping.

Attended by the key personnel for the respective agency, the workshop also addressed amongst other issues, including vessel survey and certfication, licensing and establishment of domestic standards, as well as small craft regulations and ship manifests.

Following a discussion on Port State Control, as well as vessel tracking and enforcement, Ministry of Transport Secretary Ned Howard, together with MCI CEO Glenn Armstrong conducted a review on regulatory compliance attendance at Workshops before wrapping up the workshop.

MORE AERIAL SURVEILLANCE ON FISHERIES ACTIVITY FOR THE PACIFIC 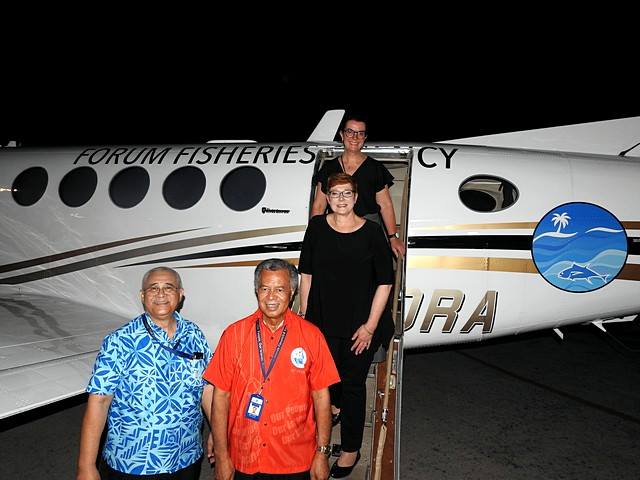 “The Aerial Surveillance ensures we have more Pacific eyes in the sky on fisheries activity across the exclusive economic zones of our Pacific member nations,” says FFA Director General James Movick. “Today is an exciting milestone for fisheries surveillance, as well as broader law enforcement supporting the protection of our oceanic resources for the benefit of our people.”

Chair of the Forum Fisheries Committee, Cook Islands Prime Minister Henry Puna, in launching the program, commended the efforts of those involved in bringing the initiative to fruition, heralding “a new era in Pacific maritime security capability.”

“On behalf of Leaders, I acknowledge with gratitude Australia’s 30-year support towards our region’s maritime surveillance capacity, initially through the Pacific Patrol Boat program and now this added capability of aerial surveillance. This program has given regional governments the confidence to add the services of civilian contractors to our on-going support from the QUADS (defence assets of Australia, France, New Zealand and the United States).”

In the recently published report, Cook Islands reported a decrease in the number of inspections with deficiencies; from 27 in 2016 to 20 in 2017. Number of deficiencies has also seen a significant decrease from 181 in 2016 to 116 in 2017.

Another Flag State Performance Table by The International Chamber of Shipping (ICS) which was released earlier this year also showed positive progress by the flag.

The table presents performance of individual flag states, analysing each flag administration’s performance based on several criteria including Port State Control records, ratification of international maritime conventions, use of Recognised Organisations complying with A.739, attendance at IMO meetings and newly-added criteria on participation in ‘IMO Member State Audit Scheme’.

Under the IMO criteria, the table above indicates Cook Islands’ effective adherence to all applicable mandatory IMO instruments covered by the IMO Audit Scheme, as well as Cook Islands’ commitment to the implementation and enforcement of IMO rules – reflected in the regular attendance of Capt. Ian Finley, Cook Islands Ambassador and Permanent Representative to IMO, at major IMO meetings.

In terms of reporting requirements, Cook Islands shows full compliance with ILO reporting obligations and demonstrated full and complete effect to the relevant provisions of the STCW Convention. The flag is included in the latest STCW ‘white list’as approved by the IMO Maritime Safety Committee.

Cook Islands also maintains a low average age of fleet and has established the use of recognised organisations, authorised to conduct survey work on their behalf, that comply with Resolution A.739.

He added that the progress made by MCI for the past year is encouraging and the ship registry is hopeful about getting on the Tokyo MOU White List. 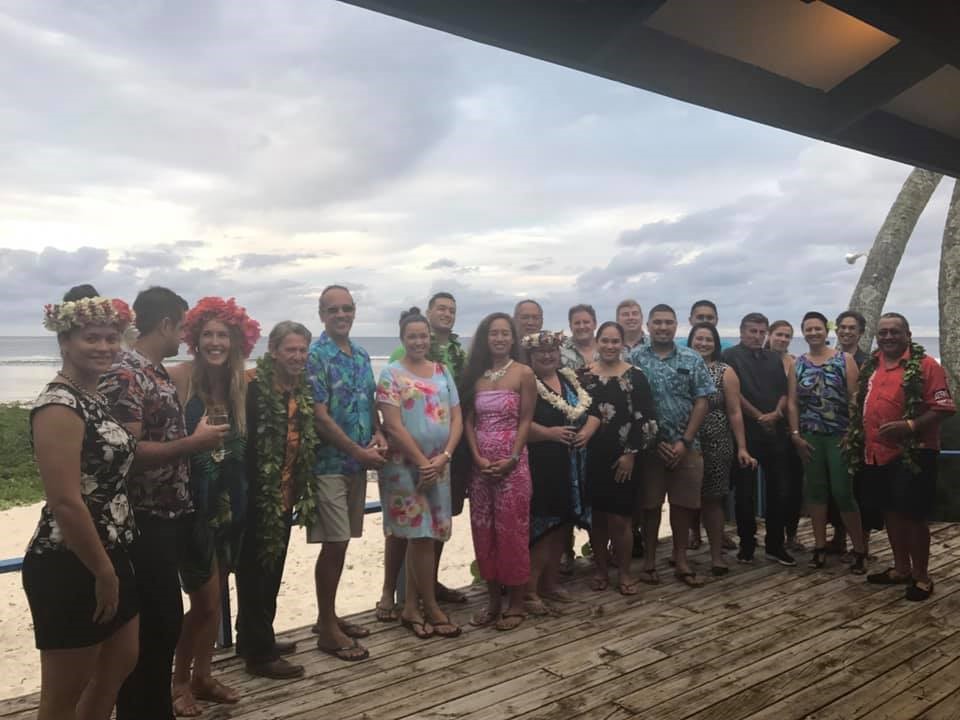 This year marks International Maritime Organisation (IMO)’s 70th year since the agency was first established, aiming to create a universally fair and effective regulatory framework for the shipping industry.

The World Maritime Day theme for 2018 ties in closely with this milestone – “IMO 70: Our Heritage – Better Shipping for a Better Future”. According to the IMO: “This provides the opportunity to take stock and look back, but also to look forward, addressing current and future challenges for maritime transport to maintain a continued and strengthened contribution towards sustainable growth for all.”

And for the Cook Islands, this year’s celebration was a gathering of industry professionals including personnel from the Ministry of Transport and other maritime-related government agencies.

Once again, congratulations to the IMO on 70 years of service from the Cook Islands! 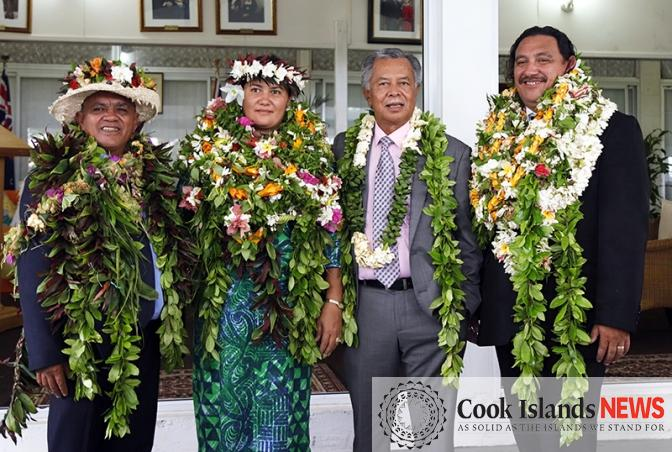 His Transport portfolio would include the Maritime section – responsible for the administration of the Maritime Transport Act and associated rules and regulations, as well as ensuring the Cook Islands obligations under international maritime laws and conventions are met.

Hon. Robert Tapaitau will be working closely with MCI who manages the open registrar for ships and yachts on behalf of the Cook Islands.